A deep dive into the 8 most popular magazine covers

When editors and art directors come together to create a cover for their magazine issue, there is a lot of time and planning involved. In the previous article, we covered the basic elements of a successful magazine cover, which can be summarized as follows:

For this article, we’ll examine some of the most commercially successful and popular magazine covers in recent years, diving deep into the reasons why they worked so well and highlighting where applicable the above elements. 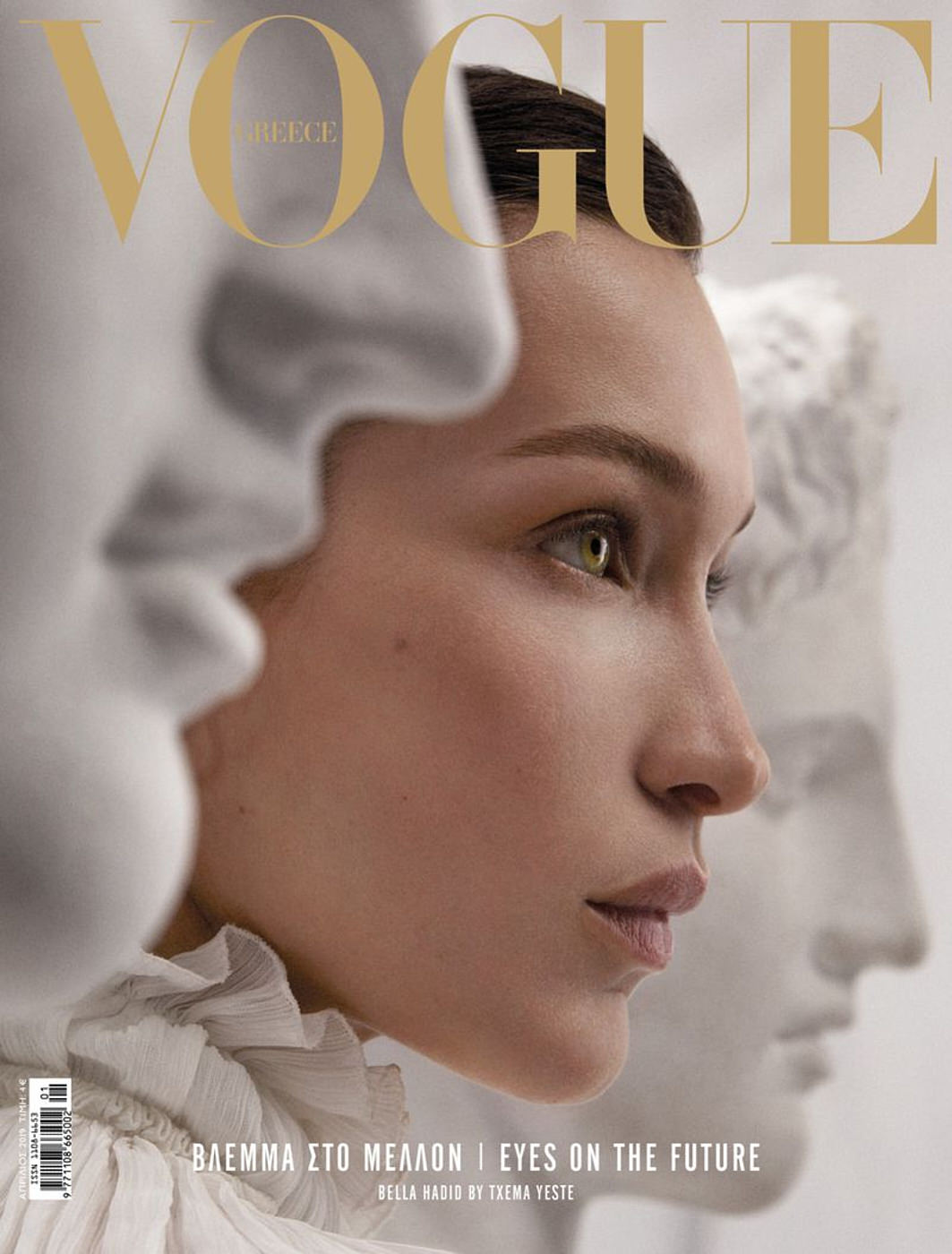 A simple, yet genius concept featuring supermodel Bella Hadid on the cover of the April 2019 issue of Vogue Greece. Taken by photographer Txema Yeste, Hadid’s side profile is sandwiched between the faces of two white marble busts from Ancient Greece. While the model isn’t directly looking towards the camera, her amber eyes are still a key point in the image, matching the gold masthead, which works as an effective contrast to the stark white and cream colour palette in the image. 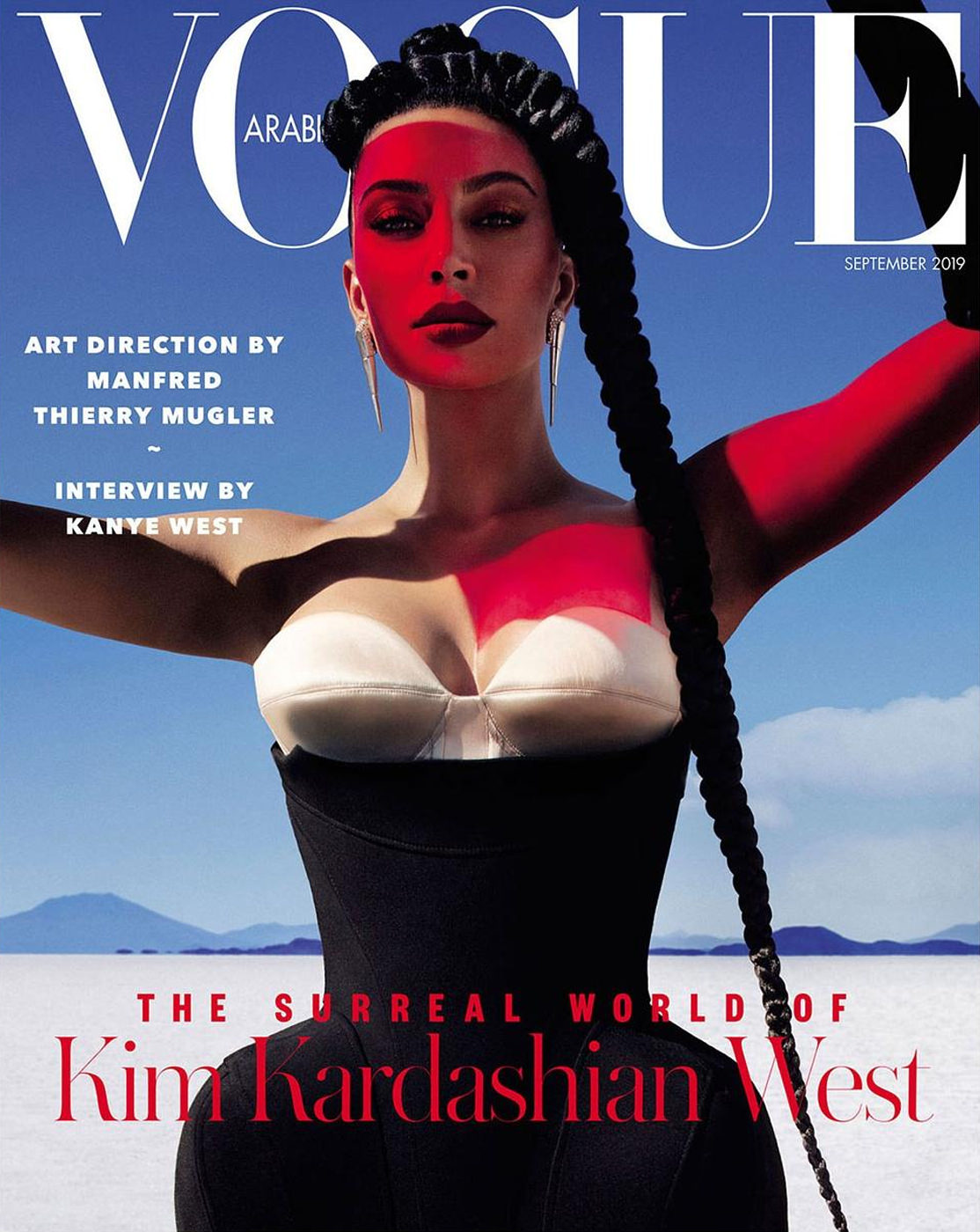 Vogue Arabia’s September 2019 issue featured reality star and business mogul, Kim Kardashian, in three different covers captured by photographer Txema Yeste, under the supervision of designer Manfred Thierry. Each cover had a distinct style, but the most popular cover image is the one featured above. Taken in the middle of the California desert, Kim is pictured in a simple black and white bodice, with a bright red light cast on her body, as she looks straight towards us. The use of the bold lighting creates a sharp contrast to the blue and white background. In our previous article, we mention the popularity of the colour red for magazine art. While the colour is mostly used in the typography, Yeste takes a unique approach to incorporate the colour onto the cover. 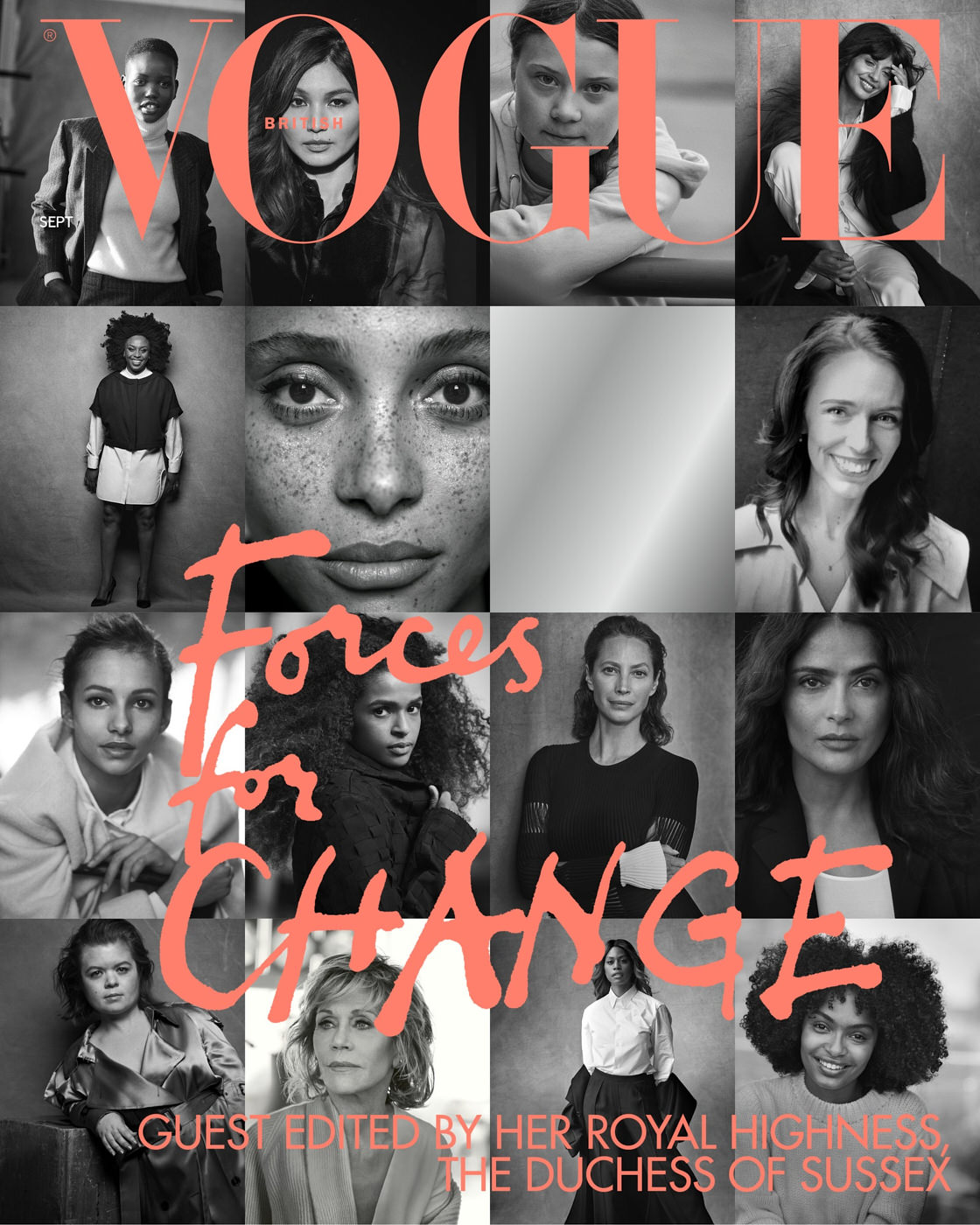 Guest edited by Meghan Markle, the cover for the magazine’s September issue moved away from the usual fashion shoot and instead highlighted a range of female activists and politicians. The cover features 15 black and white portraits all taken by photographer, Peter Lindbergh, of the women featured in the editorial, but with a blank space in the middle. This is another great example of a special edition, which also showcases the power of using black as a canvas to help enhance the coral lettering for the cover. 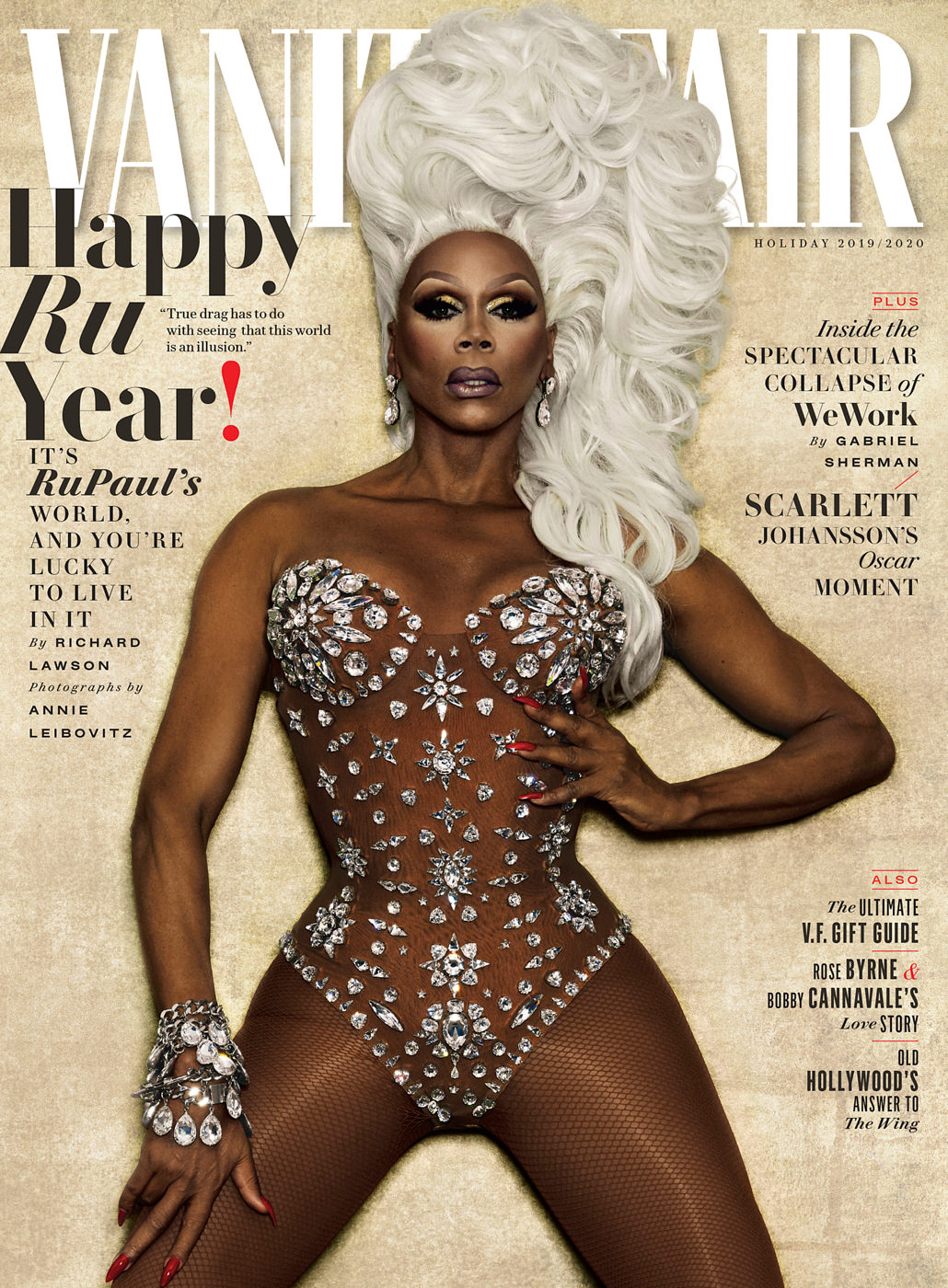 In the 2019/2020 Vanity Fair Holiday edition, legendary photographer Annie Leibovitz captured superstar drag queen, RuPaul, in a sparkling number that was highly festive. Special editions are usually the bestselling issue of the year – but this cover in particular sparked great interest within the media. In the drag world, RuPaul is one of the most recognisable performers thanks to his successful reality competition show, RuPaul’s Drag Race. From an artistic perspective, the cover captures a domineering pose, with RuPaul’s hand placed on the edge of the bust. The drag queen’s sheer jeweled corset also enhances the symmetrical stance of the cover star. 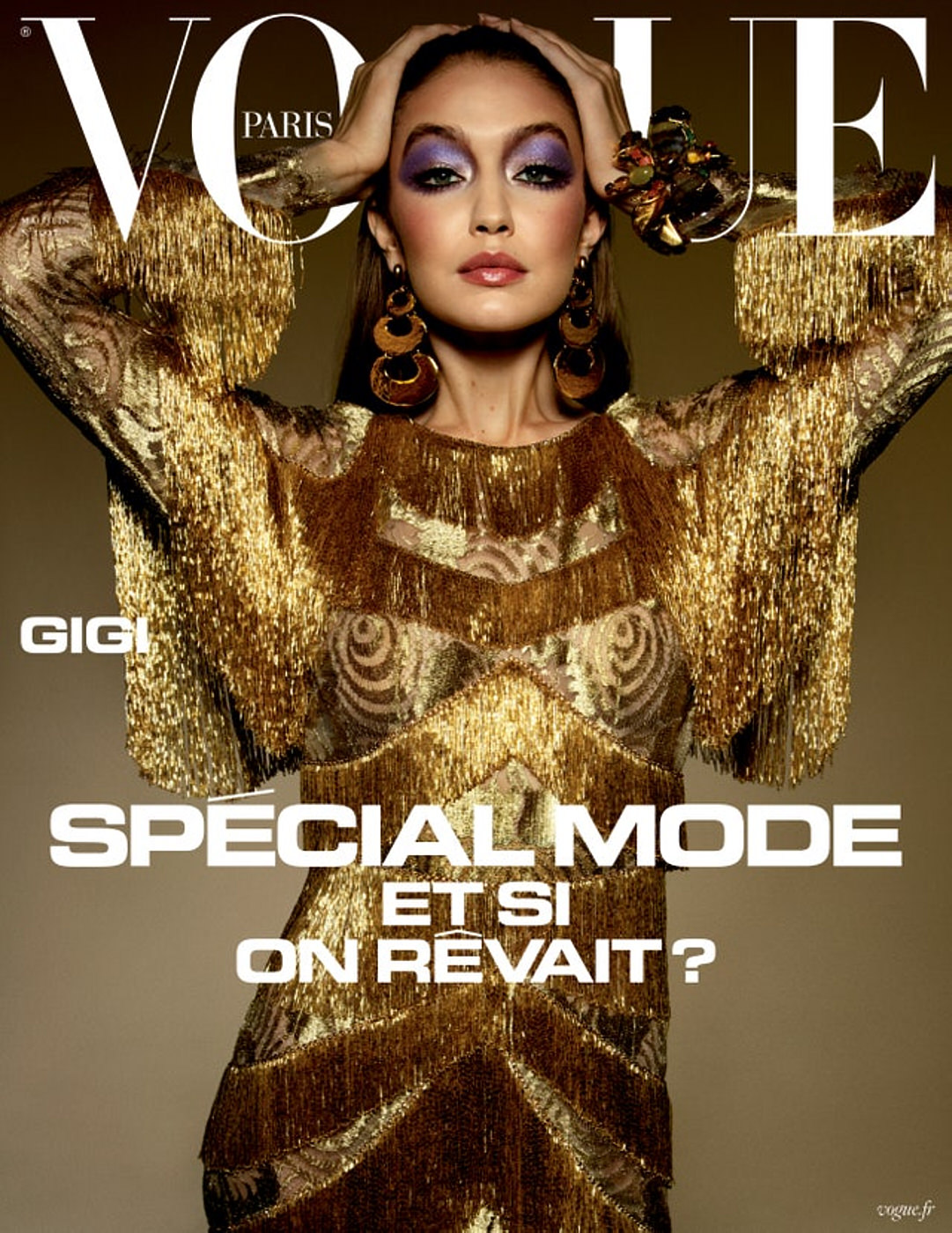 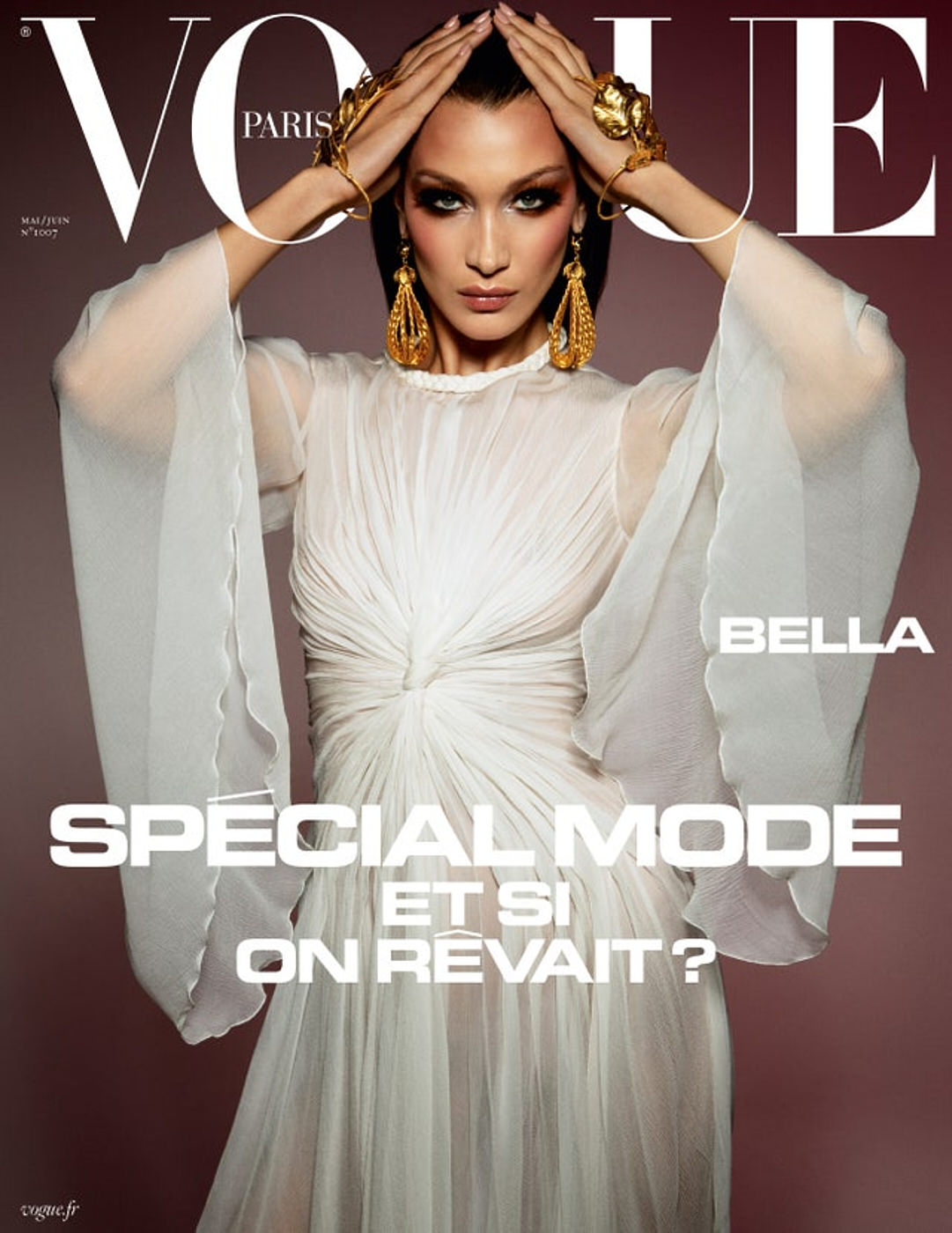 In a double cover edition, Bella and Gigi Hadid both strike a similar pose for Vogue Paris’ May/June 2020 covers. While the models are no strangers to the covers of high-end fashion magazines, these particular covers were a standout within their modelling portfolio. Taken by Emmanuelle Alt and Inez Van Lamsweerde, the Hadid sisters dazzle in their white and gold dresses and accessories. What makes these covers work so well is the use of symmetry, highlighted through the position of their hands and arms – bringing focus to their faces. Notice also the makeup: while different, both models use bright-coloured eyeshadows which draws attention to their eyes and adds a stark contrast to the overall colour scheme of their outfits and the backdrop. 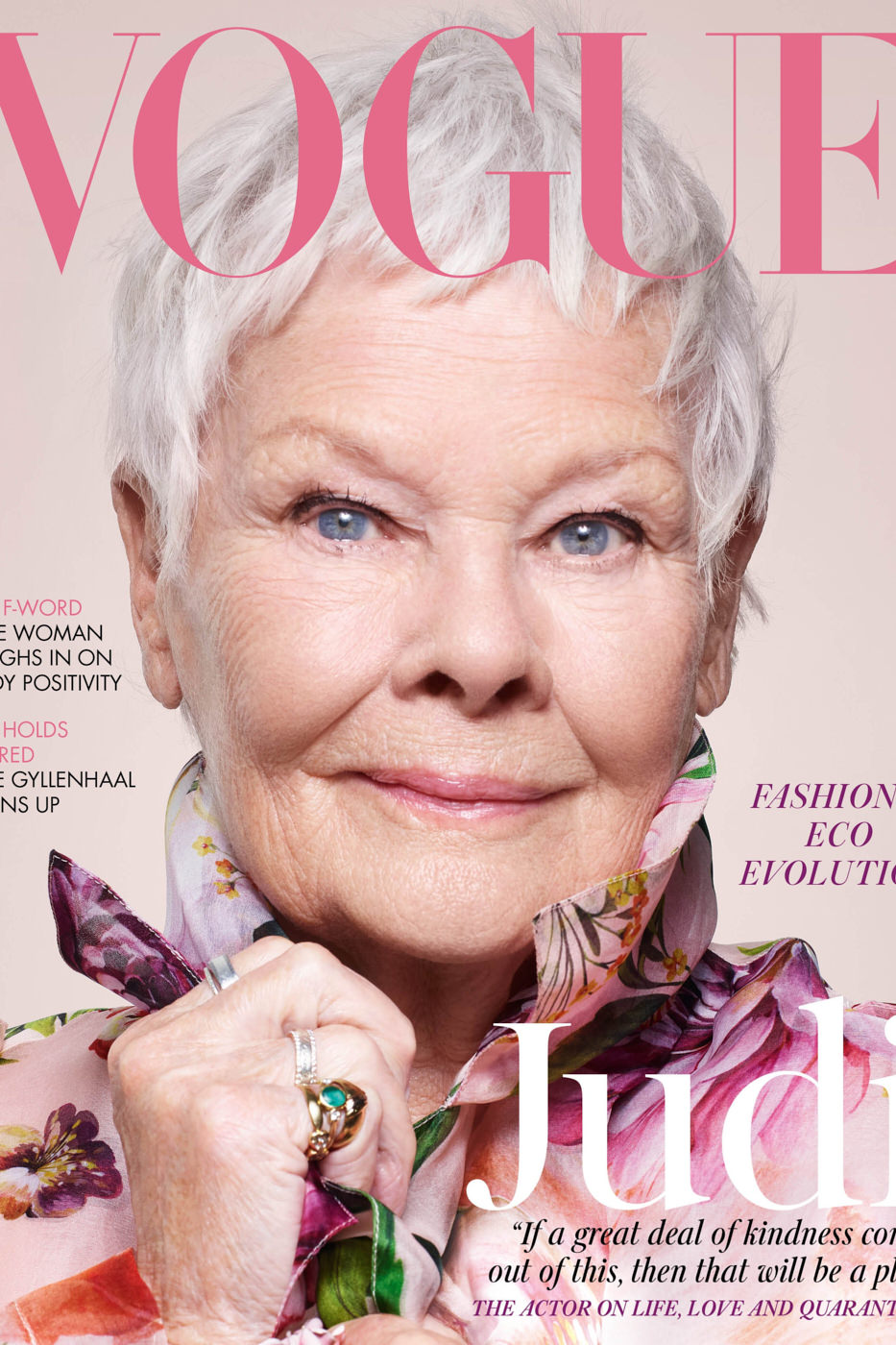 85-year-old Judi Dench became the oldest cover star for British Vogue after posing for their June 2020 issue. Taken by Nick Knight, the cover offers a pink palette to represent the spring season. The pink colouring complements the overall feminine aesthetic but also acts as a subtle yet effective backdrop to Dench’s piercing blue eyes.

Breaking the standard rule about using A-list models, British Vogue’s July 2020 edition featured three covers with three frontline workers: a supermarket assistant, a London train driver and a midwife. This is a great example of using a special edition to highlight a key cultural event and the people working to keep communities running. Although the covers feature ordinary working people in their uniforms, the images still adhere to the formula we discussed earlier. While not all cover stars are looking directly into the camera, their eyes are still prominent. The everyday nature of the covers’ aesthetic is also a break from Vogue’s signature fashion-forward and creatively dynamic style. 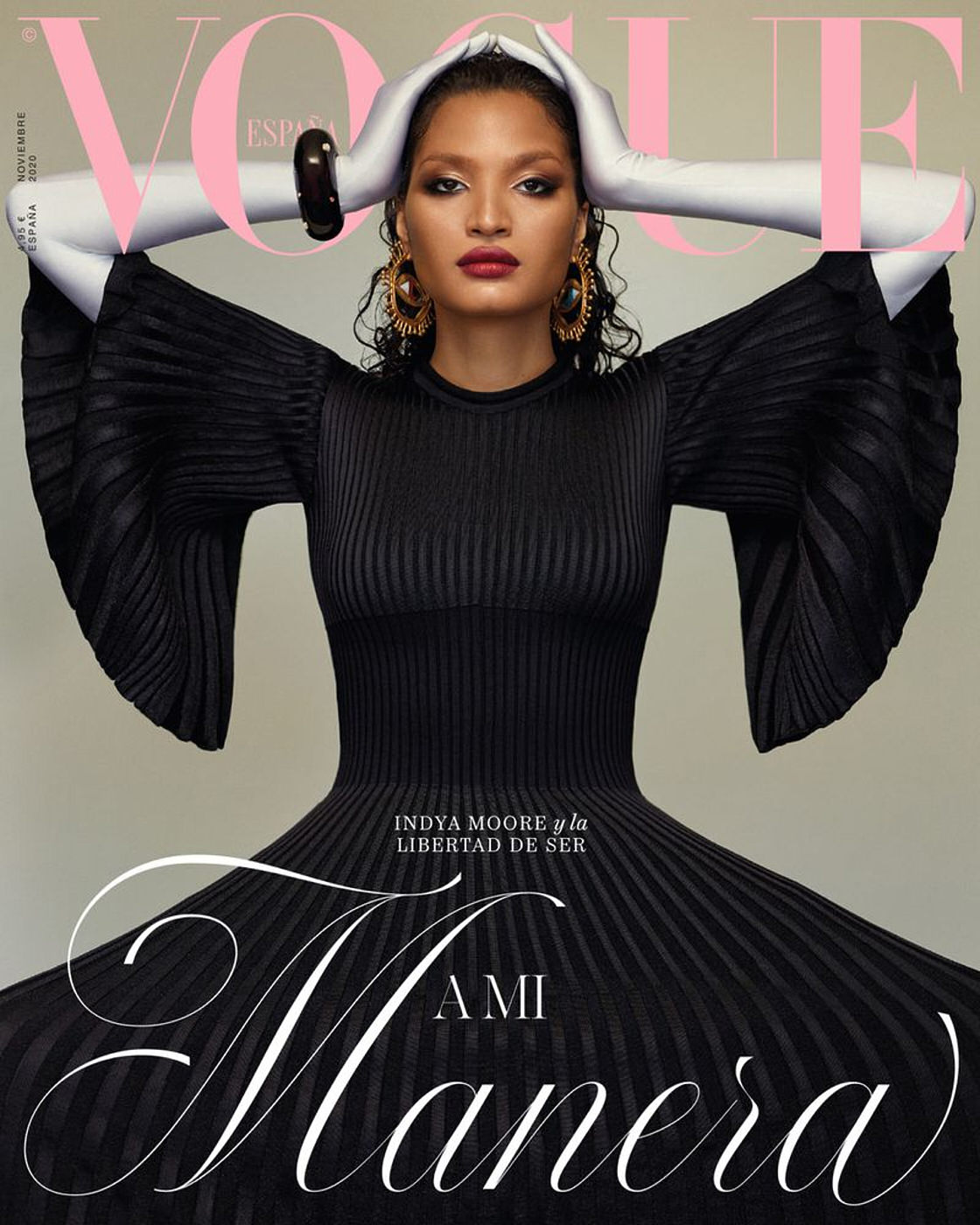 In a historic precedent for Vogue Spain, TV star Indya Moore became the first transgender woman to grace the cover of the magazine’s November 2020 issue. The cover image is striking and stunning. While Moore is looking directly into the camera, the viewer’s attention is drawn to her face and head by the grey gloves which emphasize and encapsulate her face. The contrast between her face and the grey gloves creates a perfect focal point for the image.

Editors and their staff are tasked with the challenge of making their cover stand out from a sea of competing titles on the magazine rack. Although 2020 was a challenging year for selling physical copies, a select number of copies were still able to make an impact.

Do you have any suggestions, additions, is this post out of date, or have you found any mistakes? Then we look forward to reading your comments. You are welcome to share this post. We are very grateful for every recommendation.

Angela is a freelance writer from the UK who specialises in travel, beauty and lifestyle content. When she’s not writing, you can find either playing with makeup or planning her next trip.
Posts by Angela Needham